A new year, a new challenge!

A New Year brings a new challenge! During a recent trustees visit by Hugo, Jean and myself to Mettupalayam, we went to a small Irula tribal settlement, about 1/4 Mile from our farm. There we found 21 families, many of whom were originally linked to the debt slaves that we freed some 15 years ago. They had previously moved on to Kancheepuram, to work at a rock breaking quarry works.  However, this work proved to be both unhealthy and little better paid than the debt slaves work that they had been freed from.

On promise of free houses given by the Government, they have moved back into our project area. Some infrastructure has been put in place, for example, a piped water supply and a paved road, but housing is still awaited, meantime, the families are living in mud walled, palm leaf roofed huts, little better than animal shelters. As quarry work isn’t available, some of the men are doing wood cutting, supplemented by agricultural labouring.

With little work available during the monsoon season, income has been minimal and most of the families have been existing on rice only! Having identified that all the children were both anaemic and obviously grossly underweight, I managed to complete a survey to calculate their BMI.  Incredibly, these were all so low that they didn’t even reach the lowest levels on the graphs! Similarly, their upper arm measurements were off the scale. It was distressing to see the affects of such abject poverty still existing, despite all the excellent work that Venkat and his team have done over the last 35 years.

We immediately agreed to start a nutrition programme to address these problems and are now providing a range of fresh vegetables to each family, every week. We have provided the appropriate cooking vessels and drinking tumblers to every family. We are also encouraging them to use our free weekly health clinic. The four youngest, school age children are coming in to our Crakehall Primary School in Mettupalayam and they are having a nutritious breakfast and lunch, as well as healthy snacks. We are supporting the older children going to the nearby Government school and 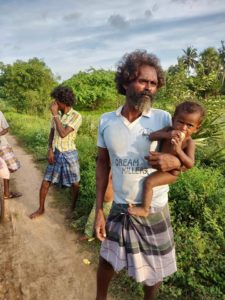 Venkat is providing a cooked lunchtime meal to the two oldest people in the village. Very sadly, our support was too late for one other elderly man who passed away shortly after our visit. All the 68 villagers will be assisted and helped in whatever way we are able. We are currently committed to running this programme for six months and will then assess its impact.. We also need to try to improve the tribe’s income generation and have offered work on our farm. Additionally Venkat is paying a small daily wage to Selvi as coordinator. Venkat will make sure that all the adults are registered with the Government, for ration cards and any benefits that are available.

Funding for this extra commitment will initially be around £500. This is a big additional challenge to Venkat and his team but we know that, with our support, they will be successful in making a real difference for these very disadvantaged and needy tribal people.

Following a reasonable monsoon (Venkat estimates around 70% of normal) we have planted six acres of paddy, a quick growing variety that should be ready to harvest in 3 months. Although this is of lower quality than we would like, it would be too risky to have planted rice which took longer to grow as water scarcity may well be seen later in the growing season. This paddy will be followed by pulses, vegetables such as drumstick, and groundnuts. The farmers’ co-op is continuing to trade successfully and they have recently opened a shop on the main road near Mettupalayam. Government funds are still awaited to build the new oil processing unit but meantime they are very happy utilizing one of our storage buildings on the farm.

We are often moved by the support that we receive, both from individuals, and from schools. Before our last visit, Ravensworth Primary School invited us in and presented us with several large bags of good quality school uniforms, including dresses, T shirts and shorts. We have taken most of these out to our project and after sizing by Venkat, these were handed out to children at the school. The excitement had to be seen to be believed! Some of the girls were so thrilled that they rushed onto the school roof, changed into their new dresses and came down with huge grins on their faces. We so often forget how little these children have and how much they appreciate everything that Venkat and the IRDT team do for them.

On our return, we were very happy to be invited back and give an assembly talk with photographs to all the pupils at Ravensworth, and to add our thanks for their support and generosity. 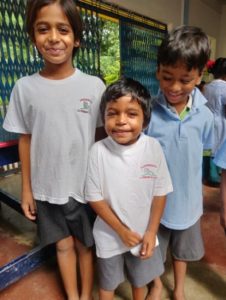 Recent events, including Christmas fairs and coffee mornings have been very successful, raising much needed funds. In particular, Crakehall School, near Bedale, has been amazing with their Cookie challenge and Christmas cards raising almost £500. Material brought back by visitors has again been sold this last year through Artison Workshops in Masham, and we thank them hugely for their continuing support. We have another coffee morning planned for Sunday the 23rd February at the Muncasters and we are pleased to invite anyone locally to come. We are also appealing for further financial help with the Ullampakkam project, and any additional donations will be gratefully received.

Our newsletter has been mainly relating to this new project, but please be assured that all our other work is proceeding well, with Venkat and team as always, very busy! Some of you may know that he has just had a cataract operation and he is making a good recovery and will soon be driving again! Meantime our neighbour Karen, and Venkat’s daughter, Ramya, are at the project and trying their best to make him take rest whilst recuperating!

Once again, many, many thanks for all your support and interest.

How To Find Us

We use cookies to ensure that we give you the best experience on our website. If you continue to use this site we will assume that you are happy with it.Ok